To run TCEP simply do ./scripts/build.sh && docker-compose up. Check out our live demo at GENI!

Video of the demo

Video of the demo 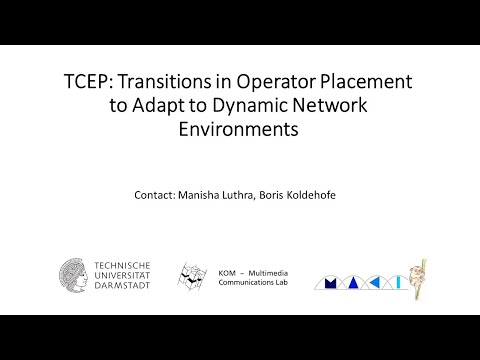 Adjust $PROJECT_HOME/scripts/templates/docker-swarm.cfg as indicated in the file

Simulation can be executed using a GUI (mode 7) or without a GUI. The mode can be set in $PROJECT_HOME/docker-stack.yml file as an environment variable in simulator service.

A full list of simulations can be found below:

the script will deploy the docker stack defined by docker-stack.yml to the cluster formed by the VMs

GENI and CloudLab provides a large-scale experiment infrastructures where users can obtain computing instances throughout the world to perform network experiments. TCEP includes useful scripts to enable easier simulations on GENI which are described below.

First, a so called RSpec XML file is needed in order to get a GENI/CloudLab cluster up and running. To automatically generate a cluster with a specified number of nodes you can execute the following command:

This will generate the rspec.xml file with the at “out-directory” with the specified number of nodes. Furthermore, this also generate the Docker swarm file (docker-swarm.cfg) with the correct amount of empty apps running on the GENI hosts.

After you deployed the RSpec on GENI, you can download a Manifest XML file which contains information of the hosts that GENI deployed. This is useful because GENI automatically generates IP addresses for the hosts and if you created a cluster with a high amount of nodes the search for this IP addresses can be a heavy overhead. After downloading the manifest file you can run the following command to extract the IP addresses out of it and print out the config that can be put into the “docker-swarm.cfg” file:

This will convert the manifest and will print out the IP addresses of the started hosts in the config format for the docker deploy script. You should see an output like this

Now the hosts are successfully deployed on GENI and the project is ready to be setup on the hosts. To setup the GENI instances to be able to run docker, run the following command

If you are running on a new cluster you never worked on before, you will maybe need to authorize docker on the master node to be authorized to access a private docker registry. You can do this by executing the following on the master node

After the instances are all setup, you can go forward and finally run the cluster on the hosts by executing the following command

The steps from above are the same, except that you have to replace the name of the RSpec image to be used before calling the generate script.

Specifically, you have to replace this line in scripts/templates/rspec_node.xml

This project is based on AdaptiveCEP for specifying complex events and QoS demands.

Feel free to contact Manisha Luthra or Boris Koldehofe for any questions.